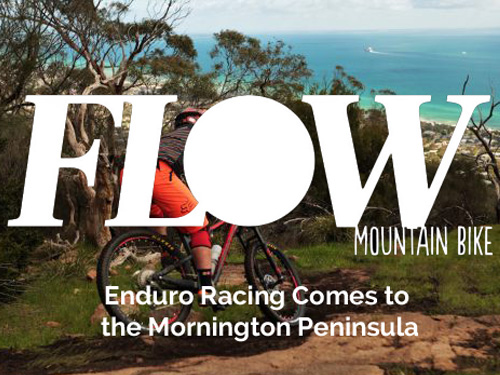 Mountain biking on Victoria’s Mornington Peninsula has achieved a significant milestone with the first ever race conducted on trails constructed within the Arthurs Seat State Park.

Organised and promoted by the Red Hill Mountain Bike Club, the Red Hill Gravity Enduro was conducted on the weekend of September 24-25.

A full field of 190 riders ranging from juniors to international level elites competed for more than $12,000 in cash and prizes over a six stage course on trails built by the Red Hill Riders.

Mornington Peninsula is a stunning spot for a race.

The winner of Men’s Elite was Melbourne-based New Zealander Shannon Hewetson, who completed the six stages in 17 minutes and 23.14 seconds and won $1000 in the process.

However, Hewetson’s overall time out on the tracks was more than three hours as the riders had to also climb 1100 metres in the six stages that linked each of the competitive stages.

The winner of Women’s Elite was Dora Bettridge from Glen Waverley, taking top spot on the podium in a time of 24 minutes 45.53 seconds and less than a minute back was Lyndsay McAlpine.

“The riders had a great time, the organisation worked smoothly and there is no doubt we have learned a lot,” said Red Hill Riders president Mark Gardner.

“Considering we formed the club nine years ago with the dream of one day having dedicated trails and a venue capable of hosting high quality racing as well as recreational riding, this event was a big achievement.

“It wouldn’t have been possible without the co-operation of the Parks Victoria and the Mornington Peninsula Shire, so we extend a big thanks to them.

Gardner said the mountain bike park had the potential to further boost the Mornington Peninsula’s as a tourism region.

“We had riders come from Melbourne, country Victoria and even some from interstate,” he said. “We know plenty stayed for the weekend and that’s great for the wider local economy.

The venue is one hour from Melbourne, five minutes from freeway access and at the heart of a tourism region that offers plenty of attractions once the riding is done for the day.

“Now that we have successfully got underway, the next step is to conduct another event,” confirmed Gardner. “We’re already looking forward to it and we’re sure plenty of riders are too.”